What Is and Is Not Hebrew Roots

Are We Jewish? Are We a Cult?  Do We Believe in Jesus (Y'shua)?
Why Do We Celebrate Passover and the 7th Day Sabbath?

There are some common misconceptions about Hebrew Roots that these videos below should clear up.

The Hebrew Roots Movement is a general term used for an emerging grassroots spiritual awakening taking place worldwide with Christians returning to the original first century faith, beliefs, and understanding of the Scriptures as taught by the Messiah, Early Church and Apostles.  Hebrew Roots is not a denomination or church, but rather a mindset seeking to emulate Jesus (Y'shua) as much as possible.
[1 John 2:6 | Luke 6:40]

Hebrew Roots Christians are sometimes called "Whole Bible Believers" due to our teaching of and obedience to the whole Word of God (Old and New Testaments). We follow the first-century foundation of the faith: that every disciple of Jesus (Y'shua) is to walk (live) just as the he did, in obedience to the Old Testament laws and commandments of God.

Return to main page ... What do Hebrew Roots Christians Believe?

What IS and IS NOT Hebrew Roots - Common Misconceptions

Let Me Show You "THE WAY"

The Apostle Paul:
"But this I confess to you, that according to The Way which they call a sect (cult, heresy),
so I worship the God of my fathers, believing all things which
are written in the Law and in the Prophets."
- Act 24:14 NKJV

Today, in the latter days, a Revival has been springing up across the entire world in a return to the purity and obedience of all of God's Word and the original teachings of the Messiah, Apostles, and first-century church.  This return to the original gospel and teachings of the first century church has many names, most still clearly identifying it with "The Way."  In English-speaking countries, many call it "Hebrew Roots" while others call it "Whole Bible Believers," "Christian Roots," or something else. Some don't like labels and just refer to it as a move of God's Holy Spirit, a return of Israel to the ancient paths, or being a true disciple of Jesus (Y'shua).

"This is what the Lord says:
'Stand at the crossroads and look; ask for the ancient paths,
ask where the good way is, and walk in it,
and you will find rest for your souls.'"
- Jeremiah 6:16 NIV

On first encountering the Hebrew Roots Movement, many incorrectly believe that we are 7th Day Adventists or Jewish (meaning we follow Judaism). Both assumptions are false. They say we observe the "Jewish 7th Day Sabbath" and the "Jewish Holy Days" like Passover.  The more you study the Bible, the more one learns that these are not Jewish things but are Biblical things directly commanded by God to those who love and seek him.  Passover is a Biblical Holy Day commanded by God [See Leviticus 23]. The 7th Day Sabbath is a part of the 10 Commandments [Exodus 20:8-11], but who has ever rightly accused someone of being Jewish because they obey the 10 Commandments?  It is the Bible.  It is God's Word. Since when are we not supposed to obey God and God's Word (All of It)?

First and foremost we believe in Jesus (Y'shua) of Nazareth as the Messiah of Israel and that he is the God of Israel. He is our Lord, Savior, and King. He died on the cross for the sins of the world and was resurrected from the dead on the third day. Jesus (Y'shua) lived his life as our model, so we have a perfect example to follow in living, thinking, speaking, and loving.

Third, we clearly recognize that our salvation comes by faith in Jesus (Y'shua).  We do not obey God's Laws and Commandments TO BE SAVED, we seek to do them because we love God, BECAUSE WE ARE SAVED.  No one who is saved keeps on violating the Laws of God. If they say they are a disciple of Jesus (Y'shua) and continue violating God's Laws, John says they are a liar [1 John 3:3-7].

Hebrew means "one who has crossed over." Basically, the concept of a Hebrew is one who has left the pagan world system and "crossed over" into living in the Promised Land of God's Word. This is modeled after the life of Abraham, the first Hebrew. Abraham's life was not only considered "the model of faith" by the Apostles, Abraham's life models the journey of every disciple of Jesus (Y'shua) in coming out of the pagan world system into a life of purity and holiness based upon obedience to God's Word.

God called Abraham while he was living in a pagan, worldly culture.  Abraham followed God's instructions, not knowing all the details, purely trusting and obeying God and placing his life and future in God's hands. Abraham believed God and God's plan (covenant) and it was counted to him by God as righteousness, then Abraham obeyed God.  God told Abraham to leave his home and extended family behind and go into a new land, a Promised Land that God would give him and his children as an eternal blessing.  In doing so Abraham "crossed over" the Jordan River into the Promised Land.

Many in the Hebrew Roots Movement prefer the word "Hebrew" because Abraham was the first Hebrew and because the only covenant relationship God made with a group of people was first made with him.  The God of the Bible is known as the God of Abraham, Isaac, and Jacob (Israel).  The culture of the Bible is Hebrew not Jewish. The language of the Old Testament is Hebrew.  There is also a distinct difference between the Western and Greek way of thinking and the Hebrew way.  Learning the Hebrew way of thinking provides significant depth to the entire Bible, helping one understand the Bible more accurately, and bringing it alive in ways most have never experienced before. 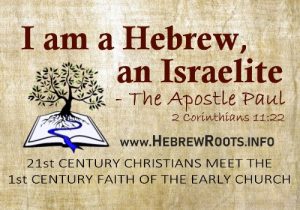 In the Hebrew Roots Movement, one will more often hear the term "Hebrew Roots" or "Hebrew" or "Israelite" used by people to describe ourselves in this move.  Some also use the term "Messianic" which is a general term just meaning 'of the Messiah.' This should not, but is often confused with "Messianic Judaism" - which we are not.

While many use some Hebrew and the original Hebrew names of God, the Messiah, and people in the Bible, we are not a part of the divisive "Sacred Name Movement" which excludes others who don't use their preferred names and demands others to become baptized in those names in order to be saved.

Some in Hebrew Roots refer to themselves as "Christian" and some do not.  Some don't like the term because of it's connection with centuries of pagan and non-Biblical practices in traditional Christian churches.  You will find a variety of opinions on what to call ourselves, "Israel," "Whole Bible Believers," "The Way," "Christian Roots," or something else.  We know that the term is not as important as our relationship with God and how we walk daily as a disciple of Jesus (Y'shua) in obedience to God's Word (All of it).  Regardless of the term we might pick for ourselves we remain all one family, the Body of Messiah.  For whoever does the Will of the Father - they are family [Matthew 12:50 | Matthew 7:21].

Return to ... What do Hebrew Roots Christians Believe?