Confused about God's Laws, whether you should obey them or not.
Before you say no, take a look through King David's eyes. 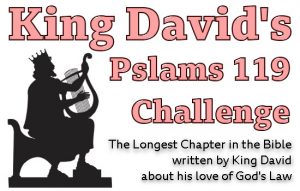 A VIEW FROM THE NEW TESTAMENT:
Sin is lawlessness. No one who is Born-Again keeps on violating God's Laws.

In his early years, David, son of Jesse, was known as a young shepherd who gained first notoriety by protecting his sheep against lions and bears and also as a musician, later by killing Goliath, Israeli's enemy champion of the Philistines. He becomes a favorite of the current Israeli King Saul and a close friend of Saul's son Jonathan. Worried that David is trying to take his throne, Saul turns on David. After Saul and Jonathan are killed in battle, David is anointed as King. God's creates a covenant with King David to always have someone from his family rule over Israel.  This was fulfilled in Jesus (Y'shua), a physical descendant of King David, who reigns as King of Israel for all eternity.

King David - A man after God's own Heart

The Apostle Paul said in Acts 13:22
"And when he (God) had removed him (King Saul), he raised up David to be their king, of whom he testified and said, 'I have found in David the son of Jesse a man after my heart, who will do all my will.'"

King Solomon wrote in Proverbs 4:23 NIV
"Above all else, guard your heart, for everything you do flows from it."

Jesus (Y'shua) said in Matthew 5:8
"Blessed are the pure in heart, for they shall see God."

King David wrote in Psalms 51:10-12:
"Create in me a clean heart, O God, and renew a right spirit within me. Cast me not away from your presence, and take not your Holy Spirit from me. Restore to me the joy of your salvation, and uphold me with a willing spirit."