Who Are We? The Church or Israel? The Answer IS: Yes!

THERE IS A GREAT DECEPTION that has flooded and infiltrated the Hebrew Roots Movement.  The source of this false teaching actually comes from Traditional Christian Churches.  This False Teaching is that ISRAEL IS the Jews in the Middle East. First, let me state that this article IS NOT anti-Semitic nor replacement theology (the church replacing Israel).  It is vitally important to a disciple's walk to UNDERSTAND WHO ISRAEL IS BY HOW GOD DEFINES ISRAEL, NOT MAN.  This article here is only a summary which leads to the main Bible Study article below that has the necessary Biblical sources required to properly understand.

Just as the description of the End-Times Church in Revelation 14:12 states: "Here is a call for the endurance of the saints, those who KEEP THE COMMANDMENTS OF GOD and their FAITH IN JESUS (Y'shua)."

IN THE Old Testament times you could be a direct blood relative of Jacob (Israel) - Let's call them Natural Israel (Natural Branches) and IF they do not have faith in the God of Israel AND follow him and his covenants THEN THEY WERE CUT OFF, CAST OUT of the Congregation or Nation of Israel.

IT IS THE SAME IN New Testament Times...
The God of Israel, came in the flesh as Y'shua (Jesus) and if you do not have faith in him, trust and obey him - AND THE COMMANDMENTS (TORAH), THEN YOU ARE NOT ISRAEL.

AS ROMANS 11 clearly states, BECAUSE OF UNBELIEF IN JESUS (Y'SHUA) the natural branches (those who are Israel by blood) are cut off of the Olive Tree (Israel). BUT they can be grafted back in IF THEY FOLLOW JESUS (Y'SHUA).

THIS DECEPTION that floods Hebrew Roots about who the Nation or Congregation of Israel really is, this is causing much confusion, twisting and warping one's understanding about of God's work on the earth and about prophecy.

GOD'S PEOPLE ARE...
In Matthew 12:50 Jesus (Y'shua) said who is his family, his people.
"For WHOEVER DOES THE WILL OF MY FATHER in heaven is my brother and sister and mother."

Matthew 15:12-14
"Then the disciples came and said to him (Jesus/Y'shua), "Do you know that the Pharisees (Modern Rabbinical Judaism) were offended when they heard this saying?" He answered, "EVERY PLANT THAT MY HEAVENLY FATHER HAS NOT PLANTED WILL BE ROOTED UP. Let them alone; they are blind guides. And if the blind lead the blind, both will fall into a pit."

I KEEP HEARING JESUS (Y'SHUA) WAS A JEW!
Yes! HE WAS THE PERFECT JEW! He lived in perfect obedience to the Father, the Torah, and the Prophets. It is he, the Perfect Jew who condemned the Pharisees, who modern Rabbinical Judaism claim as their founders. Jesus (Y'shua) said they are "children of hell" and their father is Satan. [Matthew 23:15 NLT]  He warned his disciples to stay away from their teachings. [Matthew 16:11-12]

It is pure propaganda that to be a good and proper Jew one must listen to and follow Judaism.  It is also pure propaganda that those Jews in the Middle East are Israel.  Who told such a story? Jews in the Middle East, then adopted by most traditional Christian churches, then also adopted by many in the Hebrew Roots Movement.  It's not unusual since most of us have come out of those very same traditional Christian churches - just that many bring into Hebrew Roots many false teachings from the churches.

In John 7:19, Y'shua said to the Jews at the Temple during the Feast of Tents/Succot:
"Has not Moses given you the law? Yet none of you keeps the law.
Why do you seek to kill me?" 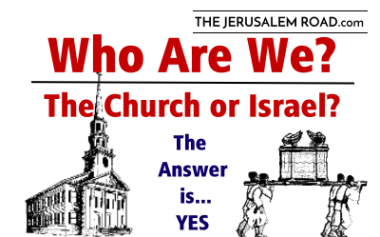 >  What is the Gospel?
>  What Does It Really Mean to Be a Judaizer?
>  What True Repentance Looks Like
>  The Trinity - Father, Son, and Holy Spirit
>  Who Are We? The Church or Israel? The Answer IS: Yes!